Break free from tired press release quotes with these tips

Despite the focus on digital media today, the traditional press release is still an important part of the public relations tool kit as it was more than a century ago.

According to the PR Museum (who knew there was such a thing?), the very first press release was issued in October 1906 following a train derailment in New Jersey that killed 50 people. Written by Ivy Lee who represented the Pennsylvania Railroad Company, the release was published verbatim in The New York Times. Not surprisingly, Ivy had once been a journalist for the paper.

Done well, a press release can serve as a powerful story, especially if the media outlet receiving the release finds value in its content, as the Times clearly did in 1906. One of the simplest ways to add value to any news release is to include useful and informative quotes. If you look at most releases, there is something of a template that communicators follow. After making an announcement in the headline and first paragraph, they follow it up with a quote — often from an executive or company spokesperson.

I’ve read and written hundreds of releases during my career, and one of my biggest pet peeves is a useless headline, opening statement or quote. You know – the one that starts with, “We’re excited to (FILL IN THE BLANK).” You get the idea.

Here are some examples direct from PRNewswire proving this practice is still alive and well. In fact, they’re so “exciting,” they’re boring:

It should go without saying that if you’re announcing something positive, you are happy, thrilled or ecstatic. Instead, write a compelling quote or statement that ties back to a key message you want to leave with your reader. Show personality and depth by attributing the statement to someone at your organization who your readers should know. Inspire your readers. If everything sounds robotic, rehearsed or stale, you’ve squandered your opportunity to add value and stand apart from the dozens of other releases sitting in email inboxes or listed on a website.

Admittedly, finding bad examples only took a couple of minutes. At the same time, I wanted to also show a powerful news release. Why is it powerful? Well, first, it leads with a compelling story that draws readers in. It captures their attention and is a stark contrast to the traditional press releases that cross reporters’ desks. Second, it uses strong quotes, telling why readers should care, which is the ultimate goal of the release: 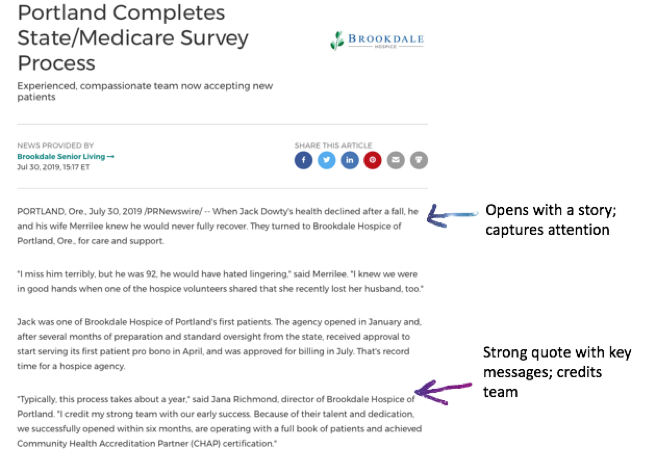 Here’s how you can craft a strong release for your organization.

Press releases should be more than an item you check off your “to-do” list. They continue to be a valuable tool in the PR professional’s tool box, so take the time to stand out from the rest. Tell readers why they should care about your news, not how excited you are about it.