Let’s not forget the storytelling excellence of John McCain

Arizonans and all Americans have now had ample time to observe and reflect upon the expansive media coverage of Senator John McCain’s passing. Many were stunned by a degree of national outpouring that seemed more appropriate for a head of state than a legislative lieutenant.

Like most in the state, McCain was originally from elsewhere – drawn west to pursue a mid-life change for fortune, fame or ambition. In his case, he migrated in order to start a family with the daughter of an Arizona business titan. He soon parlayed his success to become a politician. But with citizens of the state, he was also familiar and real.

He appeared endlessly at Phoenix sporting or charity events, where he always carried the mantle of a normal guy. He’d be far more prone to appear on a mid-inning “kiss cam” with wife Cindy from seats behind third base than say, ensconced in a private suite. Maybe that’s why when brain cancer got the best of him on August 25, more than 15,000 constituents stood for hours in 105-degree heat to say goodbye.

In Washington, we expected ceremonies that were more formal, political, routine and consistent with the ways the country has always lauded long-time Senators and former war heroes. 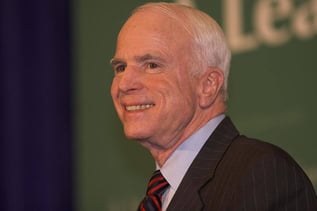 But within hours even national media were covering his passing more like the death of a former President than that of a senator.

I believe John McCain told and lived the story of his life better than just about anyone else on the national political scene.  He was heavily influenced by his nature, values, the realities of his adopted Arizona and a healthy dash of political practicality. McCain used those inspirations to become a master at crafting what we at WordWrite refer to as a “Story” with a capital S, embracing the three most important components of a great narrative.

First, he was authentic. There was no difference between his public political persona, his off-camera life and his backroom maneuvering. All were born from the same belief system that culminated in refreshing candor and realness almost never found in Washington D.C.

Second, no one was more fluent at telling their Story. He endlessly did the Sunday morning talk shows, flew the world to learn, advise, cajole and pursue the established doctrine of America as the world’s police man. Always quick to connect his views to his long-established value of doing something greater in the name of service to his country, he did so without evoking jingoistic nationalism or in the name of grandstanding. He knew his Story in all ways and dimensions and would tell it lustily and often to anyone who cared to listen – and sometimes – even to those who didn’t.

Finally, few politicians have been such a master at reading one’s “audience” in both real and “polling” time as McCain. He constantly refined and sharpened his Story to make sure it was always on point and relevant for his targets. Above all else, he was never reluctant to admit to his own mistakes or failings.

As a whole, these characteristics combined to create a refreshing leader that the country enjoyed, admired and found accessible, regardless of party politics. In his life’s final fight, he offered a glimpse into both his and our hearts about the decency in people and merits of working for the common good.

In contrast to the current national climate, it was time to thank, mourn, honor and pay attention to McCain and his sweeping, engaging story.

Maybe in him we found in ourselves the need to better model the values he lived and that we desire.

The pain, pride, honor and mourning of recent days will soon become just another historical footnote. Here’s hoping that McCain’s evocative Storytelling talent will rise above it and be something we long remember.