Malcolm Gladwell -- frizzy haired, bespectacled and cerebral -- has become the thought-provoking chronicler and prognosticator of our crazed global society of the 21st century.

Through his books (Blink, The Tipping Point, Outliers and now, David and Goliath), Gladwell has prodded an entire generation of business leaders to think differently about just about everything they do.

A key to Gladwell's success, first as a New Yorker staffer, then as an author and speaker, has been the ability to drop shockingly relevant thought bombs in the middle of cultural conversations by using storytelling about the real lives of transformative thinkers.

Whether in inbound marketing, traditional marketing or public relations, Gladwell's ability to tell stories sets him apart in helping us to make sense of the business world we navigate on a daily basis.

This morning, Gladwell took the main stage at Inbound 2014, the world's largest annual gathering of inbound marketers, to share the three characteristics of great entrepreneurs by telling the stories of Malcom McLean, Ingvar Kamprad and Steve Jobs. 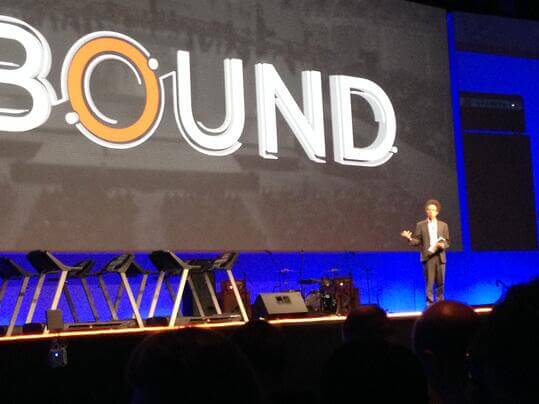 Most of us know Jobs -- iconic, irascible, determined. Not as many know McLean, who invented and commercialized the idea of shipping containers that double as truck trailers, or Kamprad, who founded IKEA (though surely, more than a few of us have sat on, built or maybe sometimes furnished entire college residences with IKEA bits and pieces).

In all three, Gladwell the storyteller finds the same three elements for success:

1) They're disagreeable. While certainly some might interpret this (think of Jobs) to mean that transformative entrepreneurs are hard to stomach for long periods in close quarters, in Gladwell's view, this means they are disagreeably unwilling to accept the status quo.

2) Disagreeable though they may be, Gladwell says transformative entrepreneurs are conscientious, in the sense that they are capable of following through on their ideas.

3) Finally, unaccepting of the status quo and determined to see their vision through to fruition, Gladwell says transformative entrepreneurs also possess a sense of urgency. Think of Steve Jobs and the mouse -- it had been under development at Xerox's famed PARC in Palo Alto for nearly a decade before Jobs saw it and quickly made it part of his vision for MacIntosh.

So what can the rest of us learn from Gladwell's distillation of what it takes to remake the world -- whether it's shipping or furniture or technology?

First, that remaking anything is a process, and that others have done it before.

Second, it can be a lonely journey and the ones most able to transform something (in our case it's the broken world of marketing agencies) have to be conscientious in a way that enables them to forget the naysayers and stay true to their vision.

And finally, when it's time for transformation, there's no waiting around for the result. Urgency drives the ability to transform a business paradigm.

Perhaps the best story Gladwell shared on this point was David Sarnoff's success in commercializing radio in the 1920s. Rejected by the traditionalists who ran RCA at the time, where he worked as an engineer, Sarnoff pulled off the first live broadcast of a sporting event (really, any event). To do so, he went outside the usual channels, stealing a radio transmitter from the military and cobbling together a network of bars, union halls and other gathering places where people could listen to Dempsey fight Georges Carpentier in what was billed as "the fight of the century" in July 1921.

As Gladwell pointed out, the broadcast was such a success that within six months, something like 1,200 companies had got into the business of making radio sets for consumers, a market that Sarnoff's RCA overlords really didn't see before Sarnoff demonstrated Gladwell's three principles.

Perhaps not as many of the rest of us are as willing to be disagreeable, or to be conscientious (fanatical?) in our willingness to make something happen, or to be so filled with urgency that we are compelled to change the world in 90 days.

But thanks to a storyteller like Gladwell, we can better understand how to embrace transformational business developments and make them work for those we serve in our own work.

As one of the iconic Apple campaigns driven by Steve Jobs once put it, "here's to the misfits."