More than 32.9 million viewers tuned in to ABC on February 26 to watch the 89th Annual Academy Awards, a show immediately followed by a 24-hour news cycle covering the highlights and the bloopers.

While most of us hope that our companies will someday receive as much media attention as the Academy Awards, this year’s Oscars exemplified important PR reminders that we should all consider when we’re in the spotlight – even for the wrong reasons.

You might remember that the Academy was under fire last year when not one person of color was nominated for an award. After the Academy was hounded with tweets and the trending hashtag, “#OscarsSoWhite,” Academy leaders promised to change.

One year later, The Academy proved its credibility by keeping its promise. We not only saw a diverse pool of nominees, but many were delighted to see Mahershala Ali win Best Supporting Actor for Moonlight, becoming the first Muslim to win an Oscar, and Viola Davis becoming the first black actress to have an Emmy, a Tony and now, an Oscar, for her role in Fences.

The much anticipated “In Memoriam” segment was especially relevant with the sad news of actor Bill Paxton’s passing at age 61 just hours before the Oscars. While the Academy loves to pay tribute to these beloved members of the film industry, viewers expect to see the photo of the right person.

That wasn’t the case for costume designer Janet Patterson, whose photo was missing from the segment. Instead, the Academy showed a picture of Jan Chapman, a healthy and very much alive producer. Even worse, Jan Chapman had warned the Oscars of this common mistake.

Thanks, Oscars, for the important reminder: check and double check your facts.

3. Make sure you know what you’re talking about

During the show, Jimmy Kimmel hilariously tweeted to President Trump expecting that he’d be watching. Unfortunately, as much as he talks about Twitter on his show, Kimmel proved to the world that he doesn’t know how to use Twitter. After posting his tweets, he awkwardly stared at the big screen waiting for his tweets to post to President Trump’s account. After a few moments, he embarrassingly asked, "We don't see what's up there, do we?" In other words, Jimmy Kimmel doesn’t know how to use the popular social media tool that he claims to use so often. Watch the video clip here.

4. Capture your audience with a story

Many claim that Viola Davis had the best acceptance speech of the night and I can tell you why – she told a story! In her speech, Viola Davis told the audience why she was grateful to become an artist and the type of stories she wants to share as an actress. Her touching story affected many, including celebrities in the audience who were caught on camera with tears rolling down their cheeks. In case you missed it, below is an exert from her speech and a link to watch the entire clip.

“There’s one place where all of the people with the great potential are gathered – and that’s the graveyard. People ask me all the time, ‘What kind of stories do you want to tell, Viola?’ And I say exhume those bodies, exhume those stories. The stories of people who dream big, and never saw those dreams to fruition, people who fell in love and lost. I became an artist and thank god I did because we are the only profession that celebrates what it means to live a life.” View Viola's full acceptance speech here.

And the moment we were all waiting for – Best Picture. After three and a half long hours, many viewers were fighting sleep to see which film won Best Picture, but Faye Dunaway and Warren Beatty wouldn’t make it so easy. After they were given the wrong envelope, Dunaway and Beatty announced the wrong winner – La La Land. It wasn’t until the entire cast of La La Land took the stage and began their acceptance speeches that the audience learned that Moonlight was in fact the winner of Best Picture. Jimmy Kimmel came back out on stage and immediately said, “I blame Steve Harvey.”

Kudos to Harvey for not letting Jimmy Kimmel or any Twitter trolls get the best of him. Harvey, who famously announced the wrong winner in the 2015 Miss Universe pageant, could have been just as angry to be associated with the Oscars mistake. Instead he made light of the situation. Here’s what he tweeted out the next day: 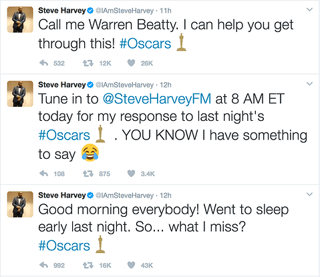 The Academy Awards have been an annual film industry event for nearly a century, but as this year’s broadcast demonstrates, there are always lessons to learn and things to remember when all eyes are on you.

Keep a few of these lessons in mind next time you participate in a PR activity, whether writing content for social media, participating in a media interview or speaking at an event. By doing so, you will earn credibility and respect from your audience.

Robin Rectenwald is an Account Supervisor at WordWrite. To learn more about our services, email her at robin.rectenwald@wordwritepr.com.