Storytelling, the most successful approach to moving hearts and minds in human history, is perfectly designed for 21st century success in communications and marketing. 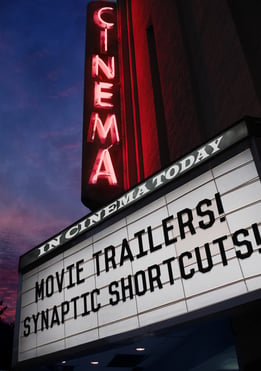 Why? because our 21st century world is all about information overload and clutter, and science proves that our brains use stories to make sense of overload and clutter by design. I have a shortcut term for the amazing results of this beautiful design: synaptic shortcuts. A disclaimer: my definition is for communicators and marketers. It is NOT the same as the definition recently applied by researchers at Harvard Medical School who have discovered a new brain pathway that may help explain how the brain handles reward learning, habit forming and breaking and maybe, the roots of many mental illnesses.

In a previous blog, I shared why storytelling has worked since humans began communicating. It’s hardwired into our brains, and we’ve been telling stories since before early societies invented the written word. Storytelling is the only communications approach that is self-contained from the start. It requires no batteries and no assembly.

This is also what makes storytelling perfect for our always-on, wired world. Whether we like it or not, the amount of information we consume each day far outstrips the amount of information our ancestors might have pondered just 100 years ago. According to the New York Times, it’s up to 34 gigabytes a day for the average American household and growing at 6 percent a year.

Scientists recognize information overload is a problem. They know, thanks to a growing body of research, that our brain is built by design to make sense of the unceasing stream of data coming at us.

The bottom line: Unless there’s a dramatic change in human biology, success is defined by communicating in ways that suit our brains. And that means communicators and marketers need to focus on storytelling.

In 2012, a fascinating University of California at Berkeley study sought to map connections between brain inputs and the meaning the brain gives them. The researchers played test subjects movie trailers to see if sights, sounds and words made particular connections in the brain. The study identified 1,705 object and action categories from the movie trailers and, using linear regression analysis, measured activity in each of nearly 30,000 sections of the brain.

A focus of the study, in keeping with the brain’s biology, was on visual inputs, because neurons that handle visual processing account for more of the brain’s cortex (about 30 percent) than neurons devoted to touch (8 percent) or hearing (3 percent).

The researchers found that the brain made selective connections, what they termed “semantic spaces,” as it reviewed, organized and responded to all the incoming information. In other words, the brain considered some information inputs more important than others, and it connected them along paths that made sense of them – as I interpret it, constructing memorable narratives from them.

What does this mean for communicators and marketers? Well, we can conceive all the marketing gimmicks and parlor tricks we might like, but unless they align with how the brain processes information, they’re not going to deliver optimum results.

And that leads me, finally, to my definition of synaptic shortcuts. If science now proves that our brains develop speedy and efficient pathways to receive, process and organize the information that’s most important to us (and reject the rest), shouldn’t we communicators and marketers be traveling those pathways with our creativity?

These are the synaptic shortcuts that matter – the shorter paths to storytelling success. Done well, good synaptic shortcuts provide story outlines that require little or no explanation because of how the brain processes them and because the brain has seen or heard or felt that story before (more about that in my next blog post).

For now, consider a few examples of synaptic storytelling shortcuts.

If you ask me about a new tech client of our firm, I could describe the client in typical tech marketing speak: “It’s an end-to-end customizable solution platform that will scale based upon the level of integration to match the end-user profile and dominate the industry.”

Right, so what does the new client do? Who knows. How about if I described the new client this way: “It’s a David versus Goliath kind of client. They’re small now but they believe they have the cloud-based technology to take on the industry leader and win.”

Makes more sense, right? Because David versus Goliath is a well-known story. Most of us know the key points in the story, especially the ending: The little guy wins! And by aligning my client with this story line, I’ve created a synaptic shortcut that makes it easier for you to understand – and remember – what the heck my client does and why you should care. If I told you the client is seeking to become “the Southwest Airlines of its industry,” you would probably know that story, too, even if you’ve never flown Southwest.

This is what the semantic space research proves – that good storytelling, especially good storytelling of stories that our brains already know and understand, improves comprehension, retention – and action.

You don’t have to figure this out all on your own. Many great minds have gone before us to give communicators and marketers excellent roadmaps to storytelling success. We’ll look at those in my next blog post. Or as a storyteller might put it . . . to be continued!