As a firm specializing in accounting services for the for-profit higher education industry, it goes without saying that McClintock & Associates is in a niche market. As such, there is high awareness of the firm and its competitors among the roughly 1,200 prospects in the sector, making for a fragmented market. There was room for McClintock to stand out in the crowd, but the four-decade-old firm needed a unique a way to refresh its brand. 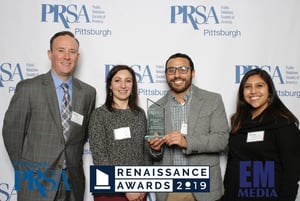 Using our trademarked process, we helped McClintock identify its Capital S Story and the archetype that best exemplified the firm — the all-knowing Sage. Using that archetype, we developed story anchors that helped transform McClintock’s brand to reflect its future, while acknowledging its legacy and client relationship-based culture.

We helped McClintock position itself as a recognizable industry leader, by constructing core messages and employing modern digital marketing strategies to build name recognition and interest among prospects. We also reached out to prestigious media outlets, including The New York Times and Bloomberg, to introduce the firm as an expert source in its field.

Today, McClintock is respected by its clients and peers as an elite firm in the market. Its paid and organic social media efforts are driving prospects at a greatly increased rate. Just 53 days into our newly developed digital campaign, McClintock’s web traffic volume surpassed that of the entire previous year. Click-through rates for paid ads on Facebook were double the industry standard and delivered at one-third the cost. LinkedIn engagements tripled.

On top of that, McClintock leaders and staffers began appearing in news outlets across the region and country, including the Pittsburgh Post-Gazette, Pittsburgh Business Times and industry publications.

Today, the McClintock story is alive and well, and more people are learning about it than ever before.

I feel like momentum continues to build about our reputation as THE CPA firm in post-secondary. That wouldn’t have happened without our work with you.